The “old Salt” in the Alpes-Maritimes 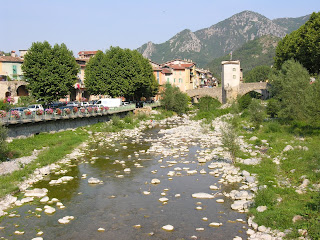 It’s hard to imagine that humble salt has been transported around the South of France for over two thousand years.  This white gold was produced on the salt flats around Marseille, transported East along the coast of the Med and then taken North with the assistance of mule packs. In its hey day up to 35000 mule trips were made in SE France and on the Italian border.
One route leads from Nice and up towards the Vésubie and the head of the valley. The other major route started from Ventimiglia, up the Roya Valley, to the col deTende and then down into Piedmont.  If you are a keen mountain biker you can even cycle this route these days!!
As you can imagine the history this transport has always been hot – with much danger from marauding hoards and super greedy powers that be, with the Savoyards creating a new route between Nice and Turin via the Haute Vésubie – all within the Savoy territory.
The Col de Fenestre however was not the most practical solution as the high passes could not be tackled during the winter, so the Roya remained an important route.  Many of the fine hanging villages which dominant the Roya were heavily fortified.
Various shenanigans over the centuries lead to the routes being diverted over the Col de Brouis and via Berghe, being extended towards Menton – all in the cause of protectionism!!
From the 15th Century up to the French Revolution in 1789 the Gabelle (salt tax) was a controversial measure, perhaps due to the fact that the clergy and nobility were exempt from it!  It is said in fact that the Gabelle was a significant factor in igniting the French way back when.
Think on when you are flavouring up your dinner this evening!!!

Various stretches of the Salt Route in the South of France form part of the itinerary of spacebetween’s walking holidays in France.