Guns and roses (well mimosa at least!) - walking/riding and military history holidays on the French Riviera 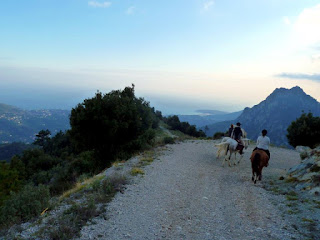 While most of your time spent in Sainte Agnès might be spent escaping from the heat of the French Riviera some 800m below, and where many a happy hour can be wiled away in its tranquil streets admiring the craft shops or taking a jar in the Hotel Saint-Yves or the splendidly located Restaurant Le Righi, do spare a thought for the village’s rich history. For sure you might be surprised to see an excitable American chasing a troupe of horses round the village which will take you back to cowboy days, but Sainte Agnès conceals much more. In the 16th Century the House of Savoy built a fortification in Sainte-Agnès, which was a strategic location between the Counts of Provence and Genoa. The fortress hosted no small amount of action between the French and the Sardinians, and became part of the Kingdom of Piedmont-Sardinia between 1814-1860.
In the 20th Century the Maginot fortification was planned to defend the Bay of Menton and to prevent attack on the coastal cities from the north. In the SE of France, the Maginot Line became the Alpine Line or the Little Maginot line. Built between 1932 and 1938, the “ouvrage” in Sainte Agnès consisted of one entry block, two artillery blocks, two infantry blocks and one observation block which faced Italy, plus underground catacombs of more than 2000m2. Perched at 780m it was one of the most powerfully armed sites of the Maginot line and even today many of the guns are in working order.
Ste Agnès can be visited everyday from June to October and at weekends in winter months.
Military buffs might well be interested in the military relics of the Maginot Line in the Alpes Maritimes which gives details of all the military relics of the Maginot Line in the Alpes-Maritimes, in the late 1920s up to some 400 installations were being planned. Further images of the Maginot Line can be found on www.fortweb.net. Many of the sites today do require some finding, and come right up to the Vésubie valley near to the base of spacebetween, Mercantour walking holidays and accommodation specialists, who don’t do specific military history targeted breaks but would be bound to help visitors to get the most out of their break in this lovely part of the world.They do also offer more general walking breaks around the beautiful village of Sainte-Agnes, which military history or not is a splendid base for a holiday, and further north in the Mercantour.
The photo is dusk returning to the Med, and Sainte Agnes after a day out on horseback. For local horse riding contact Denis Longfellow on 00 33 622 295 886.

Jo Sinnott from the Travel Channel, wild camped over night on the Authion Plateau, comfy’ed up in her tent with her steady (motorbike) steed parked just outside. The series “Wild Camping” follows her adventures around Europe on her faithful machine and takes her to some surprising places – where you might never believe she could camp outside!!

If you can pick up Travel Channel programmes, the summary of Jo’s time in the Alpes-Maritimes is a fascinating look-see at all there is to offer here in one of the sexiest departments that France possesses. The Mercantour holiday specialists, spacebetween, supported the filming team in their explorations of the Alpes-Maritimes.

The tranquillity of the place and its magnificent views rather belie its rather chequered history of skirmishing, which given its strategic look out point position is scarcely surprising.

The County of Nice had been part of the Savoy-Piedmont kingdom since 1388, and from a military point of view, Authion has its strategic mark made in earlier wars, such as the French revolution. In 1793 and 1794, weak Austrian and Sardinian forces retrenched there, held out against French troops, who were then forced to make a big detour via the Republic of Genoa to attack their rear guard.

In 1859, the Napoleon III and Cavour made a secret agreement: the French people would help Piedmont to cast off the Austrians, in exchange for France being handed Nice and the Savoy county. After the battles of Magenta and Solferino, the peace deal was signed and the County of Nice became French in 1860, despite the England’s opposition. Relations were always tense as King Victor-Emmanuel was determined to keep his fabulous hunting grounds further north in the Mercantour.

In WWII as part of the Maginot Line which stretches to Sainte Agnès, the Authion defensive system dissuaded Italians to attack from 1940.

In March 1945, General De Gaulle wanted the French army to take back territory which was still occupied by the Germans. The battle of Authion raged from April 10 to 24, and caused a massive loss to the French - 280 killed and 1,000 wounded, in comparison to 100 killed on the German side. All a last minute tragedy with the Armistice being but a few weeks away.

Visitors today can enjoy the ride up to the Col de Turini, and past the small family sized ski station of Camp D’Argent before, in the winter, parking up and donning snow shoes, for a relaxed snow shoe walk, or in the summer can either take a stroll on foot, or drive round a circuit from where you can appreciate the fort, an old tank which remains there, and the remains of barracks buildings. It rarely fails to impress on atmosphere. The site is easily reachable from the French Riviera, and from the Mercantour National Park. It is often used by the Mercantour’s walking and adventure company specialist, spacebetween, as a easy gradient day out during their walking holiday breaks. 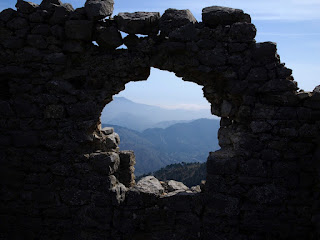 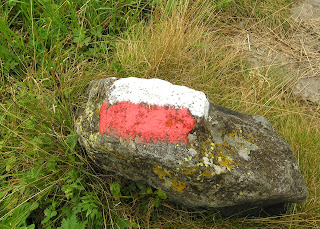 Looking for some top adventure? – wonder what your hiking friends are talking about when they mention GRs?? (jeee….air – for the unitiated!!)…Look no further….

Right back in the early 1900s, a chap called Jean Loiseau apparently created the forerunner to the GRs in his so-called “highways for walkers”, but it wasn’t until after WWII that the French Touring Club and the Alpine Club joined forces to enable people to be able to get out on the hill. Hard to imagine but paid holidays were only first offered from the mid 1930s, so with increased freedom and time post war – and yes – the demand was there!

The first offering was, surprisingly, the GR3 (the Parisians keeping the iconic GR1 & GR2 numberings for the capital’s prestige!). This was a shortish continuous routes up near Orleans. Over the past 60 odd years the numbers have now grown to some 369 – with perhaps the best known being the tough GR20 in Corsica, and straying into the European arena, the GR5 (E2) which starts in Belgium and finishes on the coast on the French Riviera.

If you’re looking for a walking holiday in France with a purpose, rather than just enjoying all the natural splendour on offer and enjoy the sun also, you could do worse to come down to PACA (Provence, Alpes, Côte D’Azur), and the Alpes-Maritimes which is traversed by no less than six GR routes, and 800 kms of great tramping

Here we go – in numerical rather than recommendation order….

GR 4 Haute Provence to the Gorges du Verdon by way of the Alpes-Maritimes from Puget Théniers to Grasse.

GR 5 Tinée to the Vésubie... and to Nice
Hits the A-M at St Dalmas le Selvage in the Tinée to Saint Dalmas de Valdeblore and then the Vésubie to Levens through the Niçois back country to get to Nice. A side walk is possible to the GR 52 and the magnificent Vallée des Merveilles (Valley of Marvels or Wonders) in Saint Dalmas de Valdeblore and the GR 510 towards Utelle.

GR 51 Balconies of the Mediterranean...parallel to the coast this magic route follows some of the E7 – Zagreb to Lisbon.

GR 52A The GR52s little mighty sister, what a panorama over the Mercantour...heads west to east from Entraunes to Tende, passing by spacebetween’s base in Berthemont les Bains.

GR 510 The Moyen Pays - from the Italian border to St Cézaire sur Siagne through eight valleys - the Roya, the Bévéra, the Vésubie, the Tinée, the Cians, the Var, the Estéron and the Siagne

If this little lot doesn’t whet your appetite – don’t forget there is the Grande Traversée des Alpes, and the Via Alpina.

The Grande Traversee have just brought out new documentation for 2012.

Spacebetween who specialise in accommodation and walking holidays in the Mercantour can offer advice on tackling the local GR's, and there is also plenty of information on search engines.