Walking in Liguria - a stone's throw from the Mercantour! 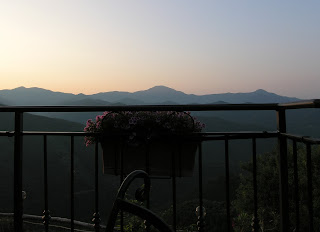 If we can only get away for a short break from the Mercantour at any one  time, there could be worse mini escapes in France or Italy, than zooting over the border into Italy!!!

While Italy is only a stone's throw as the golden eagle flies, we either have to drive down to Nice on the coast, east to Ventimiglia and then twenty minutes north into the boonies, or over to the Roya valley to the western edges of lovely Liguria.

Great value accommodation can be found in a handful of agriturismos, where, even in the summer you can get good B&B accommodation for €30-35 per person per night.

In comparison to headier prices found near to the coast on the Cote d'Azur or further west in Provence this is a good deal.  We opted for the Al Pagan, which is just outside the small village of Pigna.

There are six cutely named apartments in the house which has a lovely eyrie position with splendid views over to the village of Baiardo - the driveway is not for the faint-hearted but it's do-able.

You'll receive a hearty welcome from Roberto and Elisa and the cats and dog.  We were pleased to enjoy wine from their neighbouring vineyard and delicious fresh fruit and vegetables from their own veg patch.

We'd had a home cooked and rather belly busting lunch in La Posta in the middle of sleepy Pigna - rather overwhelmed by the delicious, but just too difficult to resist, plate of "nibbles" (ho ho!) and the home made pasta.  Regrettably (no!) we were obliged to sit and watch the sun go down from our own little garden way above Pigna (see above).

The following day we were up early and well motivated to get some calorie-burning done....while the countryside is more rolling than chez nous in the Mercantour, there are peaks over 2000m and what appeared to be a good Via Ferrata to have a play on.  The circuit around Colla Melosa  was splendid - with the most fabulous array of turban lillies that we have ever seen - we are now reaping the benefits of the wet weather we have been having (never mind the excitement of mushroom gatherers!).....but sadly after completing a fair chunk of the VF with no issue - it appeared that much of the paths have been swept away and not replaced, making a bit "hairy" to do without roping up!!!

Returning to Pigna, a swim in the clear blue waters of the thermal baths might have appeared attractive (see below) we weren't tempted to penetrate its glossy exterior - bit of a carbuncle in the midst of unspoilt countryside but there were plenty of guests there!!  We are lucky that there is not enough flat constructable for the powers that be to construct something as monstrous in Berthemont les Bains - where we are lucky enough to reside 24/7365!!!
. 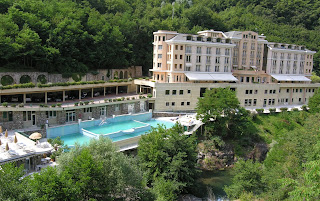 Suitably refreshed in the morning we are keen to try out the Casa e Bottega in Dolceaqua - an offshoot off the well known Osteria dell AD!! - which is located in the central square of DA - and well worth a visit for pretty good nosh at very reasonable price in a great location.

Well worth a visit - for good quality food at very reasonable prices - before the usual assault on Italian supermarkets in the afternoon, and a calm return to France!!

Do it - Liguria is stunning - and this article from the Guardian will offer some more advice for taking it all in.

Given the wealth of beautiful scenery, good refuges and its proximity to us - spacebetween - we are happy to offer short breaks across the border - get in touch if you need some pasta in your menu.