Wildlife holidays in France...wolf watching in the Mercantour 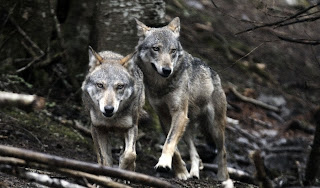 The BBC have done the cause of the wolf a great deal of good in its recent excellent documentaries "Land of the Lost Wolves".

Anyone in the UK can still catch a look at the programmes via IPlayer - a service European mainlanders have yet to benefit from! Closer to home many people might not imagine that wolves could possible exist in our forests - aside perhaps from in Eastern Europe where their exotic myths link well to tales of Dracula in his lair, and Little Red Riding Hood!

However, the wolf is alive and well, thank you very much, in Western Europe, in France, and most certainly in Italy where the wolf has been less feared as a predator, thanks perhaps to the positive slant gained from Romulus and Remus and so forth. In the Mercantour National Park, there are allegedly 20 or so wolves that roam free. This, given that the park extends over 685km2 makes the sighting of a wolf a rare occurence, but they are kind enough to leave plenty of evidence of their presence in their wake, in the form or prints (very easy to spot in the snow), scat, dens, and kills.

Spacebetween do offer walking holidays in this beautiful National Park (which few people have still never even heard of - just an hour North of Nice!), which combined with a visit to the Alpha wolf park in the Vesubie valley is an excellent lupine experience. Unfortunately spacebetween do not have the funding nor the time to spend weeks crouching in the undergrowth.......as Gordon Buchanan must have enjoyed - lucky devil! The wolf here in the Alpes-Maritimes has had a particularly bad press, and was only seen again in the early 80s - in the area around which the Alpha park is now based. On the Italian side of the frontier in the sister National Park, the Alpi Marittime Park has also recently opened a wolf park - which spacebetween hope to be able to visit this spring. Wolf adventures are also offered further north in the Ecrins, which is sandwiched between the Mercantour and the Savoy to the North.