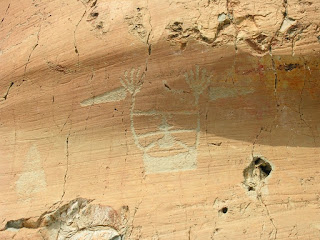 It’s hard to imagine even today what drew early Man to this remote valley in the Mercantour – the Alpes-Maritimes’ natural treasure trove.

Whichever of the many current theories it was (Chariots of the Gods’esque if you wish), the valley inspired Man to create tens of thousands of carvings on the surfaces of the creamy coloured (not blue!) rocks.

They leave a truly incredible insight into their unique culture which can really be brought to life with a visit accompanied by a local guide. (Many of the most interesting carvings can only be explored with a guide).

Over the years the valley was left to enjoy its isolation as many considered that the valley was a place of ill omen. The combination of frequent violent thunder storms (attracted to Mount Bego) and the eerie carvings, creating much fear through the vivid imagination of early inhabitants.

In more rational times in the late 19th century, Englishman Clarence Bicknell made the first detailed study of the carvings (The French dispute this of course!). Over the course of twenty one years he documented over 12000 carvings. Subsequent studies have “unearthed” many thousands more. The images are simplistic in their nature, depicting animals, weapons and tools, geometric shapes, figures, and abstract forms.

To say much more about their meaning would be to spoil the fun of an evocative day out in the Merveilles!! Go and see for yourself!

Just under three quarters of visitors to the Mercantour come to explore the Merveilles valley – yet it remains surprising that most Anglo Saxons don’t seem to be aware of this (proposed) World Heritage Site.

Until recently the valley was only accessible on foot. This can be done from either – the west – from the Gordolasque valley (from the Vésubie) or from the Minière valley – the east (from the Roya).
The approach from the west is much more inspiring as the walker is rewarded with the view of meadows and lakes, down to the valley, having reached the Pas de l’Arpette.

From the east, despite the fact that visitors can enjoy an hour or so in the very interesting Tende museum, the walk is easier but less exciting, especially when the silence is broken by the 4x4s, now (fingers crossed – not for much longer) allowed to ply their way up the valley.

No point in donning your boots at the moment as there will still be two metres of snow up in the valley. The best time of year to go is in June or July when the sight of the wild flowers is enough to make even a grown man weep, or in the autumn when colours are starting to turn.
Risk August and there will be too many people in the rather gloomy Merveilles refuge, and you probably will get very wet – although you will understand the magic of the place in the course of the drenching!!

If you want to stay over, avoid the Merveilles refuge at any time of year, and instead either wild camp, (six or more people can stay in a teepee – contact us about this!) or head to the Fontanalbe refuge.
At the base of the Minières valley there is the Neige et Merveilles refuge, and to the west the Relais de Merveilles gîte d’etape at the end of the Gordolasque valley.
Posted by liz lord at 06:49