Fun in Gran Paradiso with spacebetween

Bravo les filles - all that giggling! 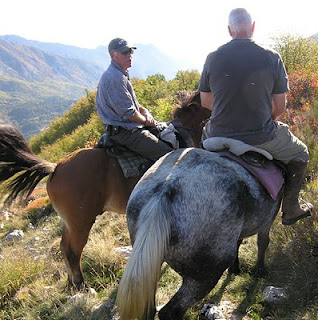 When the horses come down from the hill, I'm standing on the lane, wondering if there is any way to get out of what is about to happen. It's an impressive sight: the dozen horses, manes and tails in motion, all cantering through the forest, the dog barking at their heels. There were two patched and painted ponies, like Apache war steeds, a pair of dainty Arabs, dish-faced and bug-eyed, like they had pranced straight out of a Stubbs painting. There were a couple of greys and some big brown mares. The biggest brute will be mine, I thought – the one with the grudge.

Far below us, down 700m of mountainside, shimmering and hazy, was the Côte d'Azur with its white tower blocks, black cars and scorched skin. But we were no longer in that world; we were in a golden forest of field maples, oaks and scarlet sumac near the village of Sainte-Agnès, just a few miles north of Monaco, close to the Italian border. We were setting out on a two-day ride into the virtually uninhabited interior, our saddlebags stuffed with supplies and bedrolls.

Denis came past me, whistling, then shouting for the dog, "Avant, avant, Uxel! Allez, Juanita!" And the dog, a huge lolloping hound, was behind Juanita, one of the painted ponies, urging her down. I noticed that the dog appeared to know the horse's name, and thought, "Is that possible?"

I stepped back. My partner, Sophie, and six-year-old daughter Maddy were with Denis, catching horses by the manes, slipping on bridles, tying them up to a rope strung between two trees. But I stepped back.

Kevin in the Provencal Hills I'll be honest. Horses and me never did click. A bite on the hand long ago, tales of terrifying injuries, cowboy movies where they get thrown and trampled and bitten and generally reduced to a bloody, quivering pulp, and finally the time in Sudan – I blush at the recollection – when I coolly threw myself up on a mule, and went directly over the other side into the dirt. If only the whole village hadn't been watching! Some of them laughed so hard they had to lie down. Gimme a bike any day. To add to my woes, Sophie and Maddy are comparative experts – and they look good in jodhpurs.

The night before, Denis had explained his methods. "I leave the horses out on the mountain – that way they get strong and they have the security of the herd. They got a pecking order and they got leaders. I work with 'em."

Denis Longfellow inspires confidence. Born in California in the 60s, he grew up surrounded by writers and poets (Henry Wadsworth Longfellow was an ancestor). In the 70s he moved to Provence and spent 10 years with the last generation of old-time shepherds: "They couldn't read or write, but they knew how to keep animals."

Denis has a direct simple animal psychology: "In Europe you got a lot of culture grown up around horseback riding. There's a guy two metres up there, looking down on someone, and he wants to make that seem mysterious and complicated. But it ain't. Horseback riding ain't complicated."

A welcome mid-trek shot of pastis Photograph: Kevin Rushby Now, here on the lane, Denis is about to show me how simple it is. He grabs the big brown mare – the one with the grudge, of course – and he grips the reins in one hand together with a fist full of mane and he says to me. "Hold her like this. Get a foot in your stirrup, then jump up."

I do it. The horse keeps steady. Denis positions my toe in the stirrup. "It's a natural position: feet underneath, basin ..." he points at my pelvis. "That's where you ride – in the basin. You can stand if you want, but keep your head down and butt up. Hold the mane with both hands if you need to."

Maddy and Sophie are up, too. Mel and Liz, colleagues of Denis, are up. The loose horses are milling, hooves clattering on tarmac. The dog, Uxel, is waiting for a signal. Denis jumps into the saddle. A piercing whistle. My brown mare, Mada, turns sharply right and pounces forwards after the loose horses. A cacophony of hooves explodes around me. A black horse bashes my knee. We're going downhill at a trot and my bum is being punched. Stand up. Grab mane. Horse's head starts to pump up and down as she breaks into a canter. Denis comes rattling past, cooler than a cowboy dude, leaning back like he's tootling a Harley D up Route 66: "Sit back. Use your basin. It's like making love."

I can't sit. I can't make love with my basin. I can't do anything but hold on. And yet that's cool. Denis is cool. "OK, basin up and head down," he shouts. "Like a jockey."

I'm laughing with exhilaration. We sheer away down a broad grassy footpath. Sophie is alongside me on her grey gelding and grinning. "Well?"

After an hour we pull up by a tumbledown cottage where a man with a face full of furrows is waving a bottle of pastis. He pours me a stiff measure.

"You'll never believe what I saw this morning: a man with a knapsack and nothing else – naked!" He laughs. "I hardly see a soul up here, though it's just a few kilometres from the coast."

Guide Denis Longfellow. Photograph: Kevin Rushby A curious thing about Provence is how the coast and the mountains have exchanged population: the coast was once an overheated pirate-afflicted zone that nobody wanted, while the cool hills were desirable – everyone lived up here. Now the population is all down on the coast, even though it's still overheated and pirate-infested (they sail in gilded mega-yachts these days), and the hills are silent: you would struggle to get a pétanque match together in most villages.

Riding through the sun-dappled forest, the only humans we see are a couple of mushroom collectors. We emerge at an abandoned coastguard station and a magnificent panorama. Behind us are the snow-capped Alpes Maritimes, ahead the sparkling sea and the mountains of Corsica on the horizon, 200km away. Westwards we can see Provence disappearing in ridges of blue and violet, while to the east are the mountains of Italian Liguria.

I think Maddy is missing the rule-bound predictability of the riding school, a place where correct clothes, posture and meticulous attention to detail are observed. She has coped with the intensity of this outdoor experience with remarkable sang-froid, but for her – truth to tell – the confidence nurtured in the riding school is indispensable here.

Lunch is laid out: tiny black Niçoise olives, cheeses, hunks of bread, a bottle of red wine, pasta and salads. We eat and talk, then some of us snooze. Later we trot onwards in the deep glow of late afternoon. Denis tells me how he breaks new horses in.

"There ain't no problem when they live in a herd. The young colts run with us and they see what happens with the older horses. When they're three years old, I put a bridle and saddle on them. I use hackamore bridles so there's no bit. They take to it real easy."

In a broad meadow we gallop about and round up the loose horses, whooping and yelling like cowboys on the range. It is both ridiculous and wonderful. That evening we light a camp fire, put some sausages on to cook, and watch the stars come out.

"If only I'd known riding could be like this!" I say to Denis. "No pomp – just relaxed."

My attitude to horses has, I admit, been damaged by exposure to a certain kind of horsey person: braying women in uptight clothes, red-faced toffs in white cravats, all wearing those foul black helmets with a ribbon on top. (I have to stop myself at this point since Maddy and Sophie love this kind of kit.) Denis, I scarcely need to say, does not wear any of that ghastly garb, favouring jeans and checked shirts with sunglasses under a baseball cap.

"A lot of guys come to it when they are older – thirties, forties, even fifties and sixties," Denis says. "There's no problem with age at all."

There is a commotion among the horses and Maddy goes to investigate. She comes back grinning sheepishly. "They're doing binki-bonki."

A torch reveals what exactly binki-bonki is: a grey gelding in an aroused state mounting a chestnut mare.

"Ah, that's Dodo," says Denis. "He gets in the mood every three or four months – no problem." He goes back to turning sausages on the fire.

Next morning we ride for about three hours and have lunch on a hilltop before heading back towards Sainte-Agnès, at 760m the highest coastal village in Europe. We unsaddle the horses and send the herd off into the forest, then sit down to an excellent dinner in the village restaurant.

Later that evening, I head out alone on to the rocks around the village. The trip has challenged my prejudice, and then surprised me by flipping it over entirely. The truth is that I was the one with the grudge, not the poor horse. I sit down on a spur of granite and look around. To the south are the bright lights of Menton and Monte Carlo; to the north is complete darkness, punctuated by the hoots of owls calling across the valley. And above, as if attempting to tie these two impossibly different worlds together, is the broad spangled belt of the Milky Way.
Posted by Mel at 03:06 No comments:

Top 10 park in the world - the Mercantour of course!

Excellent to see our local National Park getting some top press and standing shoulder to shoulder with some of the world’s finest scenery. This is what they* said

The Mercantour is a long and narrow strip of National Park which lies in the North East of the Alpes-Maritimes, along the Italian border. The central zone is peppered with numerous jagged peaks, deep winding gorges, Alpine meadows, lakes, deep forests and a wide variety of flora and fauna. On the Eastern flank of the Park, in terrain carved out by glaciers, the Merveilles and Fontanalbe valleys conceal an extraordinary collection of Bronze Age rock carvings. These form a vast open air museum which is the most important of its kind in Europe. Guided visits are provided by qualified guides.

Published on Liberation.fr (http://voyageorigine.liberation.fr/voyager-autrement/les-dix-plus-beaux-parcs-et-reserves-du-monde#comment-7795), from Lonely Planet data.
Posted by liz lord at 02:51 No comments: